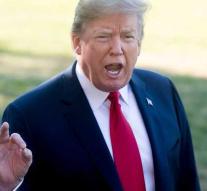 washington - The US government has published a list of Chinese products for which it wants to increase import duties by 10 percent. In total, it is about 200 billion dollars worth of goods. With the list, President Donald Trump's government is heading for a further escalation of the trade war between the United States and China.

After months of threats from Trump last Friday import duties came into effect on Chinese goods worth a total of 34 billion dollars. China responded with additional levies on American products with the same value.

'Instead of responding to our legitimate concerns, China has started to strike back against American products,' trade agent Robert Lighthizer said in an explanation of the new list. 'There is no justification for such action.'

The list includes clothing, cigarettes, refrigerators and food. The value is equivalent to almost half of all imports from China to the US. A public consultation procedure will run until 30 August. The levy can then take effect.

Even after the announcement of the new levies, the Chinese Ministry of Commerce swore that they would return. What steps Beijing will take, left the ministry in the middle.

The HangSeng index in HongKong plunged 1.5% around 07.30 (Dutch time). while the stock exchange in Shanghai fell 1.9%.