Home / World / 'US troops do not leave from Manbij' 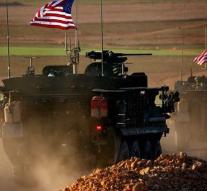 washington - The United States is not yet planning to withdraw their troops from the Syrian city of Manbij, as Turkey has demanded. 'That's not something we're considering \u0026 # x27 ;, #,' said the US General Joseph Votel according to CNN.

Turkish Foreign Minister Mevlüt Cavusoglu called Americans in Manbij on Saturday to leave immediately. They work there together with Kurdish fighters, who are seen by the US as partners in the fight against Islamic State. Ankara sees the Kurdish-Syrian militias as terrorists.

US troops patrol openly at Manbij, two US defense officials said to CNN earlier this month. That should prevent conflicts from arising. The sources suggested that Turkey-backed insurgents repeatedly shot at the Americans.