Home / World / US to study role Gülen in Turkey 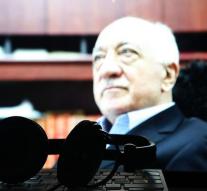 - The US Department of Justice will send a team to Turkey to investigate the Turkish allegations that would sit behind criminal activities in the United States living Fethullah Gulen. That an employee of the Obama administration confirmed Friday (local time).

After the failed coup in July, the Turkish President Recep Tayyip Erdogan demanded that the US would extradite the influential Muslim cleric Gülen. The Turkish government maintains Gülen Hizmet movement responsible for the coup attempt. Gülen has denied the accusation.

According to the employee of the US government has handed over Ankara no formal proof showing the involvement of Gülen would appear in the coup attempt. The Americans will also investigate the Turkish allegations of criminal activities and conspiracies which Gülen in the year would have organized the failed coup.


Earlier this week, Turkish prosecutors demanded two life terms and another 1,900 years additional cell at the outlaw living in rural Pennsylvania. He is next to the plotting of the coup also include terrorist financing accused.

The latter charge relates to an investigation in September 2015 into the financial activities of the Hizmet movement. That would fund, among others derived from donations, through front companies are channeled to the United States.