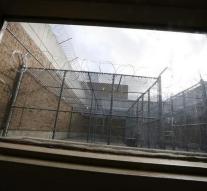 - The US government will stop the use of private prisons. That was announced Thursday by the Ministry of Justice.

According to the ministry, the private prisons less safe and effective. They are also not much cheaper. The hiring of the private institutions will be reduced. Eventually, the contracts will be terminated.

It is possible to reduce the reliance on it because the number of prisoners now falling. Between 1980 and 2013, the prison population grew by 800 percent correct. It was able to expand faster than public prisons.


Tens of thousands of US prisoners are in a private prison.

The shares of the companies that run private prisons, plunged after the statement about the stop. The share of GEO Group Inc. fell about 28 percent and the proportion Corrections Corp. of America 20 percent.