Home / World / 'US to stop point consultations with Syria' 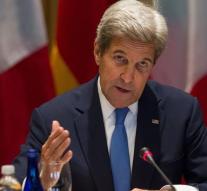 - The United States are about to break off the talks with Russia on a ceasefire in Syria. That said US Secretary of State Kerry Thursday in Washington.

According Kerry is by talking ' irrational '' given the bombings taking place in Syria. Kerry was referring to the attack on Aleppo. ' This is a time when we need to look for alternatives, '' says the American minister.

The US this week already threatened to break off cooperation with Russia in Syria. The countries have been talking for some time about a way to bring peace to Syria.