Home / World / US to keep troops longer in Afghanistan 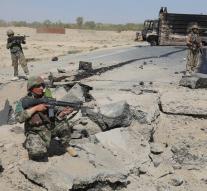 - The USA keep their troops in Afghanistan longer. The major part of 2016, the strength is maintained at 9800 people. Then the number of troops will be reduced gradually. President Obama makes the decision Thursday to the world.

Originally, the Americans in January 2017 disappear from Afghanistan, belongs to a small unit after arriving at the embassy in Kabul. The current plans provide for a contingent of 5,500 soldiers in 2017, spread over four sites, Kabul, Kandahar, Bagram and Jalalabad.

The decision to delay withdrawal was taken in consultation with the Afghan government. The unexpected conquest of Kunduz Taliban has recently played a role in the decision.

The Afghan army not only managed to retake the city.