Home / World / US take a stand against the ICC 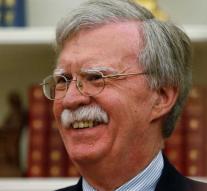 washington - The United States is taking an aggressive stance from Monday to the International Criminal Court (ICC) in The Hague. If matters are brought against US military personnel, the judges will be sanctioned. That would be the national safety advisor John Bolton going to say during a speech Monday afternoon, writes Reuters news agency.

'The United States will take all possible steps to protect our citizens against this illegal court. 'The US will fight back if American soldiers are being charged.

If a case is brought against an American soldier, the US wants to impose an entry ban on the judges and freeze their financial assets.

'We do not want to cooperate with the ICC. We will not join the ICC. We are letting the ICC bleed to death. As far as we are concerned, the ICC is already dead. '

Russia and the US, while signing the founding treaty of the ICC in 1998, did not ratify it.