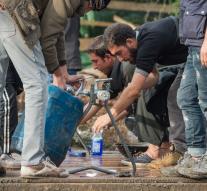 - Six US states say they no longer want to accommodate Syrian refugees because it would be dangerous to offer his people from that country in war shelter. Texas, Arkansas, Indiana, Louisiana, Alabama and Michigan responded thus to the attacks Monday in Paris.

The states say they no longer want to participate in the plan of President Barack Obama to deal with in the coming years 10 000 Syrian refugees.

" Texas can not participate in a program allowing Syrian refugees, each of whom may have a link with terror, get shelter in Texas ", the Republican governor Greg Abbott said in an open letter to Obama.

It is not clear whether the governors have the power to ward off Syrian refugees.

Republican presidential candidate Ben Carson was as quick to explain his position. Congress would be reached, according to him to halt funding for all programs that Syrian refugees to the US. Refugees who are already on American soil should be closely monitored.