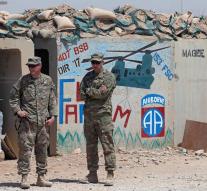 baghdad - Two American soldiers were killed during a mission in Northern Iraq. Five others were injured in Sunday's mission, reported the international coalition for the fight against terrorist group Islamic State (IS).

The first messages indicate that the incident did not happen during direct contact with the enemy.

The US Commander of the coalition, General Stephen Townsend, declared that the soldiers died in the fight against a 'cruel enemy'. The Amaq press agency Amaq briefly announced that the soldiers were killed as a result of a rocket launch of extremists in a village near the northern Iraqi city of Tell Afar.

The United States is leading the international anti-IS coalition. With US air support and military advisors on the ground, the Iraqi army conquered IS Mosul in July. In the north of the country, the jihadists still have control over a number of areas.