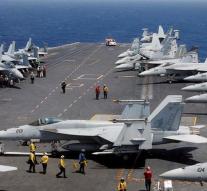 washington - The United States sent aircraft carriers to South Korea in relation to the arsenal of North Korea. From Singapore, the USS Carl Vinson, along with other ships heading put toward the Korean peninsula. US ships operate more often in the region.

Recent missile tests by North Korea are seen as a provocation by the US. The country of dictator Kim Jong-un will continue to develop nuclear weapons.