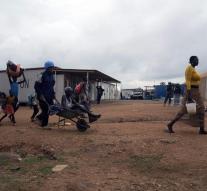 juba - While German citizens can be retrieved by the military from the capital of South Sudan, the United States choose a different strategy. US sends forty additional troops to Juba there to protect American diplomats and staff from the hostilities in the capital.

The US Embassy has already organized flights to get employees with less important functions and American citizens from South Sudan road as commercial flights are still canceled.

Officially, the ceasefire in force since Monday, but also Sudanese citizens flights still out of town. According to the United Nations are now 36 000 South Sudanese have fled the city. Because of the fighting, hundreds of people were killed. Also on the street are still dead, aid workers say.