Home / World / US sanctions because of annexation Crimea 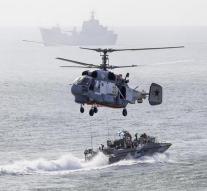 washington - The United States has issued sanctions against seven Russian businessmen and eight to the government related companies, because Russia's annexation of Crimea and Russia's conflict with Ukraine. Reported that the US Treasury Department Tuesday. These include order by Bank Rossiya employees.

Russia had already faced in 2014 with US measures, which are relatively limited and Americans to act prohibiting certain types of debt.