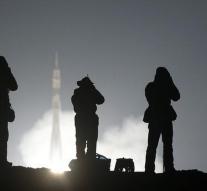 - An American and two Russian astronauts have Friday off to the International Space Station.

A Russian Soyuz rocket took off from Baikonur in Kazakhstan with Jeff Williams, Oleg Skripotsjka and Aleksei Ovtsjinin. They replace the ISS team earlier this month after nearly a year returned to the room.

The trio take the ISS three other astronauts already left for the ISS. That team is preparing for the arrival of a cargo rocket, launched Tuesday from Florida.