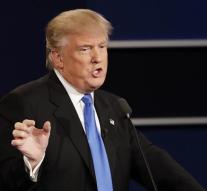 hempstead - Even conservative America is not impressed by the performance of Donald Trump in the first election debate with Hillary Clinton. Right-wing American media and opinion leaders speak of missed opportunities for the Republican candidate, who had to take it in the leading press against Clinton.

Especially the email scandal that haunts Clinton, Trump should exploit better find commentators on Fox News, the home station of the Republicans. The Daily Caller adds the fuss about the charitable foundation of the Clintons. According to the right-wing populist website was that omission not only due to Trump, but also had the discussion leader can broach the issues.