Home / World / US ready to new air strikes on Sirte 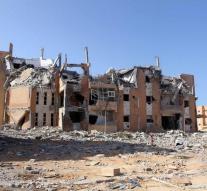 - The United States is ready again to carry out bombing raids on terrorist group Islamic State in the Libyan city of Sirte. ' If further air strikes are needed, we will be ready to deliver them, '' said a Pentagon spokesman on Monday.

The US conducted from August all 350 air strikes in Libya. The recognized government had asked the United Nations to the air support. Should there be a new request, the US will respond favorably to it according to the Pentagon.

Fighters from Islamic State are being besieged in the Libyan city of Sirte. The terrorist organization captured the town early 2015, but has since been reduced. According to US officials have IS fighters only a small part of the city-owned.