Home / World / US puts everything in order to isolate North Korea 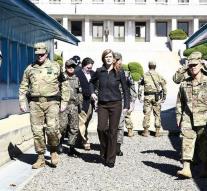 seoul - The United States will use all means to isolate North Korea. So said US ambassador to the United Nations Samantha Power Sunday. 'The US will also use the army as a deterrent to the threat from North Korea because of its nuclear program.'

The ambassador said during a press conference in Seoul that North Korea is a growing threat to the world order. 'The UN resolutions are one tool in our box. We are willing to use all tools for this serious threat. As diplomatic pressure to convince the world to isolate the regime, 'said Power.

Power made these statements after the highly secure demilitarized zone (DMZ) between North and South Korea had visited. The visit to the region came after the US and South Korea had insisted on tougher UN sanctions. North Korea held last month, a fifth nuclear test and thereby violated several UN resolutions.