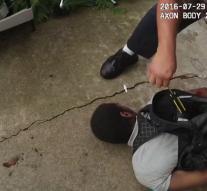 - A new video that shows how US agents shooting an unarmed black teenager raises horror in the United States. The 18 year old died while handcuffed criminal was on the ground.

The lawyer of the family of Paul O'Neal calls the images 'beyond horrible' and speaks of 'murder in cold blood. '

The video of the shooting incident that took place on July 28, was released Friday. The fatal shot is not visible on the images, because the bodycam that agent was not on. It is seen that the bleeding boy is put on handcuffs.


The jubilant mood that seems to exist after the shooting among agents encountering survivors against his chest. 'They gave each other just not high five,' said the lawyer at the Chicago Sun-Times.

The case is being investigated by the Independent Police Review Authority, an independent organization. This body gave the images Friday off and speaks of 'shocking and disturbing' images.

The shooting took place after police tried to force a stolen Jaguar convertible to stop. O'Neal, who was driving the car rammed into his flight two police cars. Two officers opened fire on the car, but the fatal bullet probably came from another agent who shot him in the back when he hit foot on the run.


Police Chief Eddie Johnson said the images provide more questions than answers. 'I can not go into details, but some issues on images worry me. 'According to him, it seems that the police have not acted by the book.

The officers who opened fire have been removed from the streets and working set only at the office. They are accused by the O'Neal family.

The United States is lately more often startled by police violence is increasingly captured on video. For example, a woman sent live early July on Facebook the death of her husband out when he was shot by the police at the time that he wanted to get his driver's license. A few days earlier was commotion about a video that shows how an agent of a black man close to death shot.