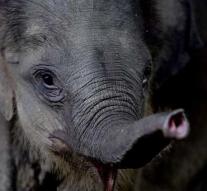 washington - The United States is quietly opening the door to elephant hunters by making it possible for them to take tusks or other parts of the animal as a trophy. That happens even though President Donald Trump has condemned these practices as a 'horror show.'

Home Affairs will look differently for license applications for the import of parts of shot big game and will draw up extensive regulations on African elephants. This political measure, set out in a memo of 1 March, means that a number of animals shot in Zimbabwe can enter the US. The requests will be assessed individually.

The Department of Fish and Wildlife Service decided in November to allow some hunting trophies to be allowed. The service argued that killing elephants would 'improve the survival of the species', partly because hunters want to pay a lot of money for their hobby. That can benefit the animal protection. Both Republicans and Democrats were disgraced. Even Trump, whose eldest sons like to take up the gun to regulate the game, took distance via Twitter, which now seems vain.