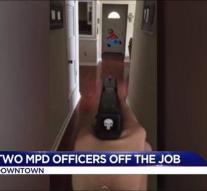 - Two American officers have been suspended after they put a Snapchat on social media that shows how a white cop a weapon aimed at an African-American emoji.

The image was an agent of Memphis put on Snapchat on the night of the massacre in Dallas last week. A US war veteran then shot five white officers down in retaliation for police violence against black Americans.

A colleague of the man placed the photo on Twitter then. Mike Rallings, police chief in Memphis, both policemen decided to suspend until further notice. 'The picture is disgusting and will not be tolerated,' said Rallings.