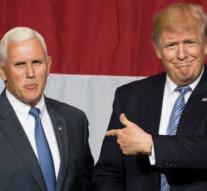 Pence distanced himself from comments by Trump that he could get women because he's famous. In turn, Trump was his running mate publicly wondering about the approach of the Syrian issue during the debate with Hillary Clinton Sunday.

There appear cracks in the relationship Trump Pence, plays the Politico. The Washington Times comes with a request from the Libertarian Party to Pence to leave the Republican camp and join in with their own presidential candidate Gary Johnson.

The relationship with Donald Trump Mike Pence has just taken a nosedive, writes The Washington Post. It is rapidly getting worse, according to the influential newspaper. Governor Bill Haslam of the state of Tennessee called the newspaper The Atlantic Trump to make room for Mike Pence.

The presidential elections on 8 November.