Home / World / US may provide dialogue with North Korea 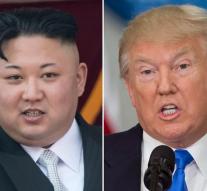 washington - The United States is somewhat more positive about a possible diplomatic solution to the conflict with North Korea. This is evidenced by the words of US Secretary of State Rex Tillerson.

'We have not seen missile launches or other provocations from North Korea since UN Security Council resolution unanimously adopted new sanctions. '

Tillerson hopes it's the beginning of a signal that the US has been waiting for. 'We need to see even more of them, but I want to emphasize that we see this. '

According to Tillerson, that could pave the way for 'some kind of dialogue.' '