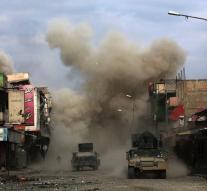 new york - The military coalition in Iraq, led by the United States, has launched an investigation into reports of high numbers of civilian casualties in the Iraqi city of Mosul. Allegedly killed by recent air strikes by the coalition. That reports The New York Times.

According to eyewitnesses, there are possibly 200 people slain in Mosul in the air attacks which were carried out between 17 and 23 March. The exact dates are not known. The BBC reports that people have seen Friday fifty bodies were removed from buildings.

The US Air Force supports the Iraqi army in the recapture of Mosul on Islamic State (IS). The city is IS-owned since 2014. Iraqi forces have been struggling for months with an offensive to gain control Mosul again. The eastern part of the city was occupied by the army in January.

The United Nations estimates that currently stuck 400 000 Iraqi civilians in the old town of Mosul. According Iraqis have managed to flee the city, putting IS civilians as human shields against the coalition attacks.