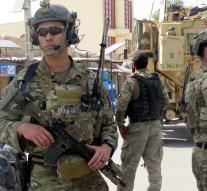 kabul - By an artillery bombardment more than fifty Taliban commanders were killed in Afghanistan, according to the American army. An army spokesman said that a meeting of the insurgents was attacked in the southern province of Helmand.

Taliban commanders from different provinces would have gathered at the meeting. 'We think the meeting was meant to plan the next steps,' said the spokesman for the US forces in Afghanistan. He said that earlier this month several other Taliban commanders were killed in operations.

The Taliban dismiss the Americans' lecture as 'propaganda. 'A spokesperson for the insurgents said that two homes were bombarded, resulting in five civilian deaths. 'This area was inhabited by citizens. There was no connection with the Taliban. '