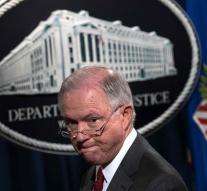 washington - The US Secretary of State Jeff Sessions was fiercely challenged on Friday by the many leaks in government circles. 'Leak culture must stop,' said the governor at a press conference. His ministry spends a lot of time and money in investigating leaks of sensitive government information.

The number of investigations into such cases has already tripled, Sessions said. In the meantime, four people are charged with the unlawful disclosure of confidential information or secret contact with members of foreign intelligence services. The ministry of justice ministry also looks at possible persecution of media, according to Sessions.

A security officer in charge, National Co-ordinator Dan Coats, then warned that the illegal dissemination of confidential data is not being tolerated because national security is at stake.