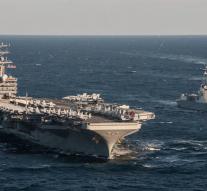 - Four US F-18s have expelled two Russian aircraft because they came too close to an American warship.

The incident happened Tuesday over international waters east of the Korean peninsula. Two Russian TU-145 aircraft were within a mile of the warship Reagan. That sent four warplanes then the air to lead the Russians away from the ship, said a Defence spokesman Thursday.

The TU- 145 is a fighter to fight submarines.