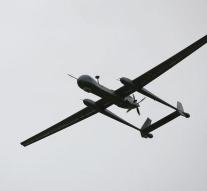 hamburg - The American and British intelligence intercepted years of secret information from Israeli military drones. Espionage yielded data about covert operations conducted by the Israeli army in Gaza and beyond Iran and Syria.

Writes the German weekly Der Spiegel on the basis of secret documents held by former CIA employee and whistleblower Edward Snowden. Also, an Israeli newspaper mentions that 'Operation Anarchist 'is mentioned. The leak of secret documents in particular the relationship between Washington and Tel Aviv damage, suspects the blade.

To get the secret data, made two secret services use an advanced listening station on the island of Cyprus, the drone data, which are transmitted via satellite, managed to intercept.