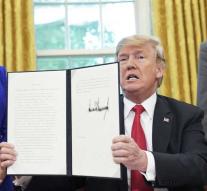 washington (anp/rtr) - The United States is imposing a 25 percent import duty on China.

The levy commences on August 23 and amounts to $ 16 billion in imports. This is shown by a list of U. S. Trade Representative (USTR) with 279 products released on Tuesday.

Products include certain Chinese electronics, plastics, chemicals and rail material. The American government is also threatening to levy a rate of 10 percent on a previously mentioned group of 200 billion dollars of Chinese products, but of 25 percent.

The US and China have been in trouble for some time now. Trump complains that China is selling more products in the US than it is buying American products.

Furthermore, Trump is not pleased that China does not open its market any further and accuses China of forcing companies to share technologies with Chinese partners.