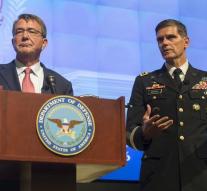 - US General Joseph Votel denies any involvement in the failed power grab in Turkey on July 15. 'Any message if I would have something to do with the failed coup in Turkey is totally incorrect,' he told Friday.

Votel (58) is not just a high-ranking officer. He is a four-star general and commander of United States Central Command, or operational forces whose soldiers are active in the Middle East, North Africa and Central Asia. governed by him include the troops in Iraq and Afghanistan.

'Turkey has been an extraordinary and vital partner in the region. We appreciate Turkey's permanent cooperation and look forward to our future cooperation in the fight with IS,' the statement said. The reaction of Votel through the Ministry of Defense in Washington did not address the origin of the accusation. It was Erdogan of Turkey itself who had accused him in a speech.