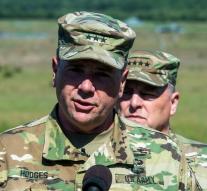 - The Baltic states are indefensible in the event of war. So says the US General Ben Hodges of NATO.

,, Russia could quickly conquer the Baltic States, then we have to defend it ', 'says the commander of US ground forces in Europe in the weekly Die Zeit. The General agrees with the assessment of military analysts that the Russian troops have conquered the Baltic capitals within 36 to 60 hours.


Hodges also mentioned numerous shortcomings that have established the NATO troops from 22 countries during their recent joint exercise 'Anakonda' in Poland. One of the main problems is that heavy equipment can not move quickly enough from Western to Eastern Europe.