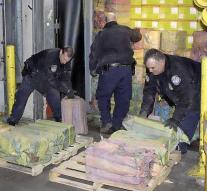 new york - American customs have found nearly 1500 kilos of cocaine in a container that was about to be shipped to Rotterdam. The drugs are according to Customs and Border Protection 77...

The drugs were hidden in sixty boxes. They were found at the end of last month in a container on a ship that arrived in New York harbor. It is the largest drug catch in that port in 25 years.

The American detectives say they had received a tip from their British colleagues. The cocaine would be brought from New York to Rotterdam, with London as the final destination, says the British justice.