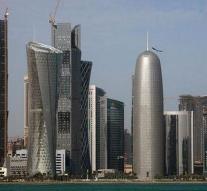 washington - The United States fears a stalemate in the conflict between Qatar and other Arab countries. A spokeswoman from the US Department of Foreign Affairs warned Thursday that the diplomatic struggle between the countries may still be 'weeks or months'.

Saudi Arabia, United Arab Emirates (UAE), Egypt and Bahrain broke the economic and diplomatic ties with Qatar a month ago. They blame the Gulf State for support to extremists and close ties with Shiite Iran. The countries imposed thirteen requirements, but the Government of Doha has always rejected it.

The situation seems to be wall-mounted. Ministers from the four Arab countries decided Wednesday after consultation to maintain the isolation of Qatar. The sanctions continue until Qatar 'adjusts its policies for good,' said Saudi minister Adel al-Jubeir (Foreign Affairs) during a press conference.