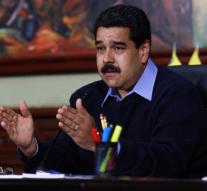 - Two relatives of the Venezuelan President Nicolas Maduro have been arrested in Haiti and moved to the United States. The pair is Thursday charged with cocaine trafficking and the laundering of drug money.

The 30-year-old Franqui Francisco Flores de Freitas and the 29-year-old Efrain Antonio Campo Flores are cousins ​​of Maduro 's wife Cilia Flores. The United States announced earlier this year that the duo was suspected and it had begun an investigation. Actual detained and brought before a judge in New York, was undermined by Venezuela as " an imperialist attack ".

Franqui and Efrain were, according to the US Department of Justice involved in the transport of drugs from Venezuela through Honduras to the United States. Observers consider the upcoming trial as a blow for the 52-year-old president, who is heading for serious parliamentary elections in December. Maduro did not want to personally comment on the matter.