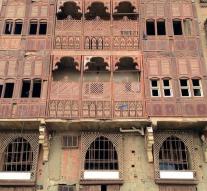 - The US embassy in Saudi Arabia said that there are indications of a possible,, imminent threat '' against US citizens in and around the city Jeddah on places where many Westerners. The diplomatic mission states that on the website.

It is not known from which the threat exists. The information that the embassy was, according to the US State Department,, apparently serious enough '' to bring this immediately.

Earlier this month, a suicide bomber blew himself up at the US consulate in Jeddah. No one was injured.