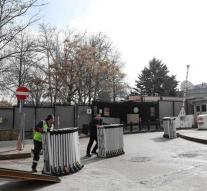 ankara - The American embassy in the Turkish capital Ankara opens again on Wednesday after it closed on Monday because of a 'security threat.' The embassy declared this on Tuesday.

The Turkish police arrested four Iranians on Monday suspected of preparing an attack on the embassy. Whether or not the security threat that was responded to is unclear.

In 2013, the American embassy in Ankara was the target of a suicide attack by an extreme left group that resulted in a death.

There are tensions between the United States and Turkey because the US supports Kurdish YPG militias in the fight against Islamic State in northwestern Syria. Ankara regards the YPG as a branch of the terrorist Kurdish PKK.