Home / World / US Embassy in Turkey closed to threat 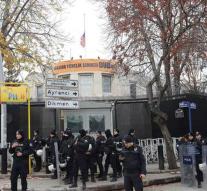 ankara - The US embassy in the Turkish capital Ankara is closed on Monday because of a 'security threat.' The embassy has informed American citizens that the office is not accessible to the public and advised them not to 'stand out too much.'

By means of a security message, which was sent out on Sunday, the embassy asked that the counter open again as soon as the services can be resumed.

Details about the 'security threat' were not given further. In 2013, the American embassy in Ankara was the target of a suicide bombing of an extreme left group where a dead fell.

There are tensions between the United States and Turkey because the US supports Kurdish YPG militias in the fight against Islamic State in northwestern Syria. Ankara regards the YPG as a branch of the terrorist Kurdish PKK.