Home / World / US does not want to talk to North Korea 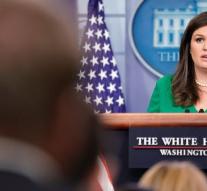 washington - The Trump government is currently not in touch with North Korea unless it concerns the release of American citizens who are stuck there. That has let the White House know Monday. 'We have been very clear that this is not the time to talk,' said spokeswoman Sarah Sanders.

She opposed reporters to a Twitter report by Donald Trump last weekend that was seen as undermining the position of Foreign Minister Rex Tillerson. 'If there have been or have been discussions, they would be about retrieving Americans who are in prison. Apart from that topic, there will be no consultation with North Korea for the time being, 'said Sanders.

Tillerson said in Beijing that the US is in contact with the government of Kim Jong-un in Pyongyang via its own channels. Trump responded with a tweet saying that "negotiating with the little rocket man is time wastage".