Home / World / US does not spare Europe with Iran sanctions 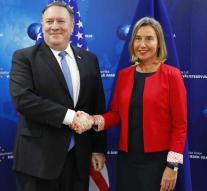 - When imposing sanctions on companies that trade with Iran, the United States is no exception for European companies. The US government has not responded to requests from Europe. 'No surprise', responded EU foreign-chef Federica Mogherini.

The EU Ministers of Foreign Affairs confirmed Monday the so-called blockade status, which prohibits EU companies from complying with sanctions and allowing them to recover the damage. However, several European companies have already announced that they will reduce their activities in Iran.

The American measures follow the cancellation of the nuclear deal with Iran. The first sanctions will start on 6 August.

Mogherini hopes that both Iran and European companies can continue to benefit from the economic benefits of the 2015 Iran deal. The blockade status 'gives us opportunities to go further,' she said.

The EU remains 'with all energy and unity' trying to keep the agreement, according to the Italian, otherwise the consequences are 'disastrous'. 'It is going to be a complicated exercise. '' China and Russia continue their activities in Iran in consultation with Europe, Mogherini decided.

Minister Stef Blok (Foreign Affairs), in a visit to his counterpart Mike Pompeo in Washington in May, conveyed the message that it is 'very bitter' when companies that are now trading legally in Iran are suddenly confronted with American sanctions.

Iran has filed a complaint with the International Court of Justice in The Hague against the 'illegal' US sanctions, Twitter Minister of Foreign Affairs Java Zarif.