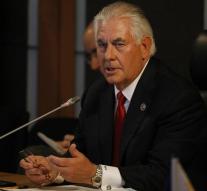 manila - Under the right circumstances, the United States and other parties involved are open to dialogue with North Korea. That's what the US Secretary of State Rex Tillerson said Monday at a regional security meeting in the Philippine capital of Manila. According to him, the new sanctions of the United Nations Security Council are a powerful signal to North Korea.

Tillerson believes that China and Russia's support for sanctions proves that the international community expects North Korea to accept the reality. He also insisted on the implementation of the sanctions, which are aimed, inter alia, on exports from North Korea.

US President Donald Trump spoke with his South Korean colleague Moon Jae-in by telephone. Moon also said he would be prepared for dialogue if the neighboring country stopped its nuclear program. According to Trump, Moon was very much in favor of the resolution unanimously adopted by the Security Council. They agreed to keep the pressure on the regime in Pyongyang high.

The Chinese Minister of Foreign Affairs expressed the hope that North and South Korea will soon be seated again. According to Wang Yi, the sanctions are an adequate response to North Korea missiles, but it is also important that the parties remain in talks.