Home / World / US Customs wants to know your Twitter name 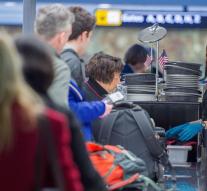 - US Customs will soon be possible to ask for your user names on social media. US Customs and Border Control presented Thursday a proposal for people who ask for a visa to it, reports The Verge Friday. It's also about people who only a short time to stay in the United States, such as a holiday.

The questions would not be mandatory, but formulated in the proposal that it is not immediately clear. With the information the online course rating can be closely monitored. The American people have sixty days to comment on the proposal before it is formally considered.

The US Immigration and security forces stand since the attack in San Bernardino last year at high pressure to extract more information from social media. One of the perpetrators was then a public Facebook message left sent during the shooting and had years earlier private messages to Facebook friends where they discussed violence. She did so even before she applied for a visa.