Home / World / US Consulate warns of attacks in Istanbul 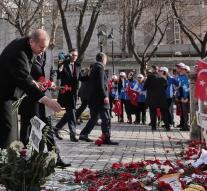 The terrorist actions have been carefully planned in a team, but also unexpectedly carried out by singletons. The consulate recommends to avoid crowds and to refrain from traveling to the southeast of Turkey, particularly towards the border with Syria.

In June, three suicide bombers blew IS located in a terminal of the Ataturk airport. Thus 45 people died. In January killed someone with a bomb belt Twelve German tourists in the historical district of Sultanahmet, Istanbul.