Home / World / US consider laptop ban on all flights 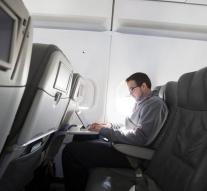 washington - The United States may wipe laptops from the airplane cabins on all flights into and out of the country. The US Secretary of Internal Security John Kelly said that in the television program Fox News Sunday. He did not mention a term. The government intends to 'lift up' for aviation security. This includes a stricter control of items in the hand luggage.

'That's what they're up to, the terrorists, possessing the idea of ​​getting a plane out of the air, especially if it's a device of American society and it's full of Americans,' said Kelly, who called this threat really. In March, ten airports in, among others, Turkey, Qatar and the Gulf States have already imposed restrictions on bringing larger electronic devices into passenger spaces.

The US has already consulted with representatives of the European Union earlier this month on banning laptops, tablets and cameras in hand luggage on flights to the US.