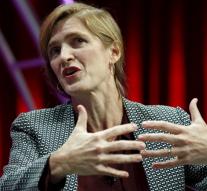 - The United States Friday confirmed Iran last weekend has tested a medium-range missile . This is " a clear violation " of the prohibition of the Security Council on the testing of ballistic missiles, a senior US official said Friday .

" The United States is deeply concerned about the recent launch of a ballistic missile by Iran ", said the US ambassador to the United Nations Samantha Power in a statement. "

After reviewing the available information , we can confirm that Iran has launched a medium range on October 10 which can carry a nuclear payload ", she said. " This was a clear violation of resolution 1929 of the UN Security Council. "