Home / World / US complain to Iranians for SamSam ransomware 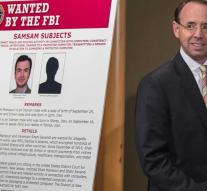 washington - Two men from Iran have been indicted in the United States, because they had been involved in creating and distributing the SamSam graft software since 2015. It concerns men of 34 and 27 years. They are both fugitive.

In the US at least two hundred organizations have been hit by SamSam. Among them are the municipalities of Atlanta and Newark, the port of San Diego and at least three hospitals. The two suspects would have earned millions.

The Washington Treasury has blacklisted two other Iranians because they would have laundered the ransom.