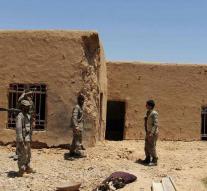 cabul - US fighter aircraft accidentally took Afghan security forces on fire on Friday in the province of Helmand. According to the spokesman for the American armed forces in Afghanistan, nine Afghans were killed, 'but this number may increase.'

'We shot a house that we suspected to be fighting enemy forces. However, that proved to be local security forces, 'spokesman Bill Salvin said. How the mistake could happen is selected.

The attack took place in the Gereshk district. The Afghan troops carried out operations against the Taliban, who hold large parts of Helmand.