Home / World / US: big steps in N-Korea within a few years 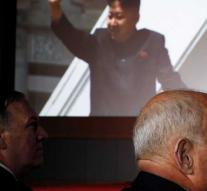 seoul - The United States wants North Korea to take major steps in the area of ​​disarmament in the coming years. American minister Mike Pompeo (Foreign Affairs) expressed the hope in Seoul that 'large-scale disarmament \u0026 # x27; \u0026 # x27; can take place within 2 to 2.5 years.

Pompeo had traveled to South Korea to catch up with officials about the Singapore summit. There, the US and North Korea agreed that Pyongyang would start work on 'the complete denuclearization of the Korean peninsula,' without agreeing when that goal should be achieved.

Washington wants large steps to be taken in the area of ​​disarmament before the end of Trump's first tenure in 2021, the minister confirmed. 'You used the term large-scale disarmament?' He asked a reporter. ' We hope to achieve that in those 2 to 2.5 years. ''