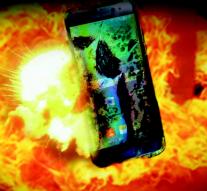 - The Samsung Galaxy Note 7 is no longer welcome in aircraft in the United States. The Ministry of Transport announced on Friday that the troubled smartphone should not be taken more into a plane.

The South Korean company had previously managed to cease production of the Galaxy Note 7 whole, after a series of incidents in which copies of the unit had caught fire. Samsung tried to fix the problem, but failed to do so. Duped consumers can get their money back.

The prohibition applies to both hand baggage and luggage going into the hold. From Saturday, the unit can also be sent out by post. 'We recognize that these phones banned from aviation will be inconvenient for some passengers, but the safety of everyone on board is the priority,' said Transport Minister Anthony Foxx in a statement.