Home / World / US assumes that IS leader is still alive 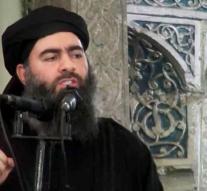 washington - The United States has so far not received confirmation that the leader of the Islamic State terrorist group, Abu Bakr al-Baghdadi, is dead. The US Secretary of Defense Jim Mattis said that he should assume that Baghdadi is still alive and that the hunt should be continued on him.

Previously, the Syrian Human Rights Observatory reported to have 'confirmed information' that Baghdadi had been killed. Western and Iraqi officials, however, maintained their doubts.

'I have not seen anything believing that the ISIS leader of the battlefield has been removed,' said Nicholas Rasmussen, director of the US Center for Terrorism. 'We know a lot. We only have not the information that would confirm his death. '

'I believe he's still alive,' said Defense Minister Mattis. 'And I'll only believe if we're sure we killed him. '