Home / World / US army can not lay off more transgender 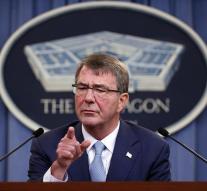 - The US military ends the ban on transgender people to come out openly their feelings. Minister of Defence Ashton Carter Thursday immediately put a line through that prohibition.

American soldiers who are transgender and openly demonstrate, there can no longer be fired for, the minister said in a statement. The US military has an estimated 15 500 transgender, according to US media, the military employs about 550 000 soldiers.

Transgenders are people who go through life as someone else than his or her biological sex. It's about people who thus have no undergone surgery to change sex.