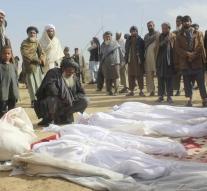 kabul - While fighting against the Taliban in the Afghan province of Kunduz last year 33 people died. The US military reported that Thursday after investigation. 'I regret the loss of innocent lives profoundly,' the US commander responded in Afghanistan, Gen. John Nicholson.

Afghan commandos and US counterparts on November 3 hunt for Taliban fighters. After they were fired at from houses in the village Boz, they asked for air support. The bombing was the houses to the ground.

According to the researchers acted in self-defense and violence was proportionate. The US military sees no reason for further action. General Nicholson said he President Ghani and the Afghan people 'wants to ensure that we take all possible measures to protect civilians. '

US aircraft have performed significantly more air strikes in Afghanistan in 2016 than in the previous year; the number of rockets fired rose 40 percent. There are regular reports of casualties among the civilian population.