Home / World / US and EU united on Turkey 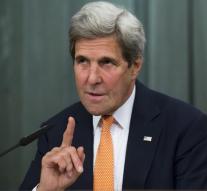 brussels - The United States and Europe are aligned on the situation in Turkey. 'The partnership between the US and the EU is strong and unbreakable,' said John Kerry, US Secretary of State after a breakfast meeting 'with his 28 EU counterparts Monday in Brussels.

It was the first time that the US and EU gathered at EU level. The meeting was well over an hour and was 'very constructive,' said Kerry. Mogherini also stressed the 'strong transatlantic' band.

The two blocs talked long about Turkey. They are very worried about the purges taking place in the Turkish army and the police and judiciary. Kerry pointed out that Turkey is a NATO ally and therefore supported. 'But we urge to be respected in that democratic institutions and rule of law.'